The B826 Schuberth helmet was implemented into the Dutch Armed Forces in 1993 and remained in service until the end of the 1990s, after which it was completely replaced by the m95 from Indyco.

In the IFOR missions, the B826 was mainly used during IFOR-1 from January 1996 to June 1996. IFOR-2 soldiers (July 1996-December 1996) were already largely equipped with the new m95 helmet. It is remarkable that during the IFOR-1 mission, soldiers of 42 (NL) mechbat Limburgse Jagers painted their blue B826 helmets in green or used green tape for camouflage reasons. Few helmet covers were available, so m53 helmet covers were used, whether or not modified.

A B826 used by a Dutch Marine during his deployment to Haiti. This example has ballistic bolts and was introduced in 1995.

A US PAGST helmet cover used by the Marines to camouflage the blue helmets. This helmet cover is original to the helmet.

A B826 repainted in white and used on an ECMM mission. 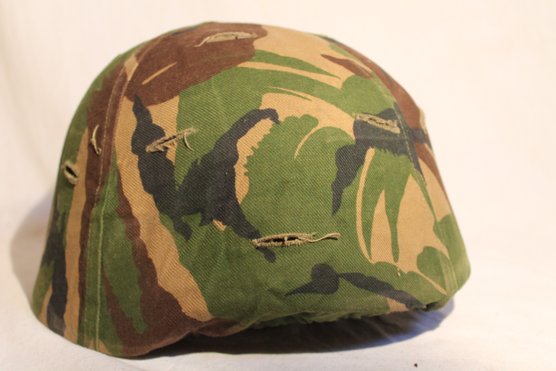 Click on the picture above to go to the B826 helmet covers page.