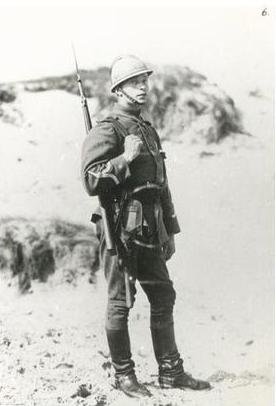 Below is a brief description of the Casque Adrian m15 helmet, as it was used by the Dutch Armed Forces. If you would like to know more, I would like to advise you to purchase the book 'The Dutch steel helmet 1916-1992'.

During the First World War, the developments of tactics, material and equipment by the various warring parties and their deployment were closely monitored by the Netherlands. It was noticed that, during the fighting on the various fronts, many were wounded and killed as a result of head injuries. It was therefore decided to introduce a steel helmet for the Dutch Armed Forces. Not only would an own Dutch helmet be developed, but a suitable helmet would also be sought abroad.

In February 1916, the Staatsbedrijf der Artillerie Inrichtingen started developing its own steel helmet. During these first developments and trials of the Dutch helmet, first trials were held in April and May 1916 by the Artillerie Inrichtingen with the French Casque Adrian, known as the m15 helmet. These first tests showed that the quality of the m15 did not meet the Dutch requirements. The m15 helmets supplied for these initial trials were all Bleu Brillant coloured, also known as Bleu Horizon. Despite the fact that the French helmet had failed to meet the requirements during the tests in 1916, the Commander-in-Chief of the Land and Naval Forces, General C.J. Snijders, order 10,000 m15 helmets on 07 June 1916. The French government soon gave permission in June 1916 and on 31 January 1917, the Staatsbedrijf der Artillerie Inrichtingen received the first shipment.

These French helmets were also not good enough, were rejected and most of them stored in the Central Warehouse of Military Clothing and Equipment in Amsterdam (Centraal Magazijn). A small part was used by Dutch soldiers until 1922. In the early 1930s, most m15 helmets were delivered to vigilante units. These helmets were repainted in both gloss black or in a dark matte green, depending on the unit. Some of the helmets were also fitted with Dutch liners and/or chinstraps.

Characteristic of the Dutch m15 is the lack of the two slots at the front and an emblem/crest. It is important to know that both Italy and Turkey also had a version of the m15 without the slots at the front. Therefore it not possible to determine whether an m15 is a Dutch helmet solely from the lack of the two slots. Its background should be known.

The m15 helmets that were delivered to the Dutch Armed Forces from 31 January 1917, were delivered in the typical French colors Bleu Brillant and Gris Mat.

After an extensive research and comparison, I have come to the conclusion that at least four French manufacturers supplied m15 helmets to the Dutch Armed Forces. I was also able to establish with certainty that the m15 was introduced by the Dutch Armed Forces in three different shell sizes. These are helmet shells in sizes A (54-56 cm), B (57-59 cm) and C (60-62 cm).

During my research I was unable to determine whether all liner sizes were introduced by the Dutch Armed Forces. In all likelihood this may be the case.

I have not been able to establish with certainty that Dupeyron supplied size A helmet shells to the Dutch Armed Forces, but this was most likely the case. I have not been able to recognize a production stamp on any of the size A helmet shells I examined to be able to determine this with certainty. The characteristics I have identified, do point to production by Dupeyron.

With regard to the shims, I researched a size B helmet with a size 58 liner with two shims placed on the sides.

I have identified at least two manufacturers who supplied size C helmets to the Dutch Armed Forces, namely Compagnie Coloniale and JAPY. During my research I was able to determine that the helmets of Compagnie Coloniale are stamped in the helmet dome. I could not find a stamp on the only JAPY helmet that I have examined because this helmet has been painted over. The JAPY helmet is easy to recognize by the typical soldered attachment of the 2 screen halves. Only JAPY has used this method.