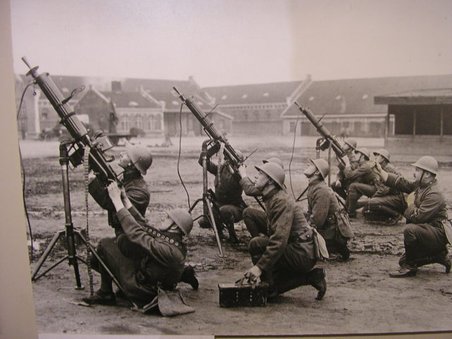 The helmet model m27 is briefly described below. If you would like to know more about the m27 helmet, I would like to advise you to purchase the book 'The Dutch steel helmet 1916-1992'. Here you will find a lot of information about decision-making, development, production, numbers and much more. There are also many photos in which you can view details and photos where the m27 helmet can be seen in use.

During the First World War, the developments of war material were closely followed by the Netherlands. It became clear then that the introduction of a steel helmet was necessary to protect the own soldiers and in February 1916 the Staatsbedrijf der Artillerie Inrichtingen (AI) was ordered to develop an own Dutch steel helmet.

The first trial models produced by AI were derived from the French m15 Adrian helmet and like the m15 Adrian, these helmets also failed. A number of trial helmets were also supplied by the company van Heijst & Zonen and these helmets did meet the requirements. The van Heijst helmets, of their own design, eventually became the basis for further development. Firma van Heijst was ordered to supply about thirty helmets for testing.

Production barely started due to a major shortage of steel. Firma van Heijst supplied only 13,000 helmets until October 1917 and the firm Braat barely 300 (trial) helmets. The order with Braat was eventually canceled as a result, they were unable to meet the obligation.

An improvement made in early 1927 on the recommendation of the Helmet Commission was a new model 2-piece chinstrap with flat sliding buckle and larger bale. The new model chinstrap, also called 3rd model, was 18mm wide and about 58cm long, and was attached to the right bale with 2 hollow rivets. A short strap with a flat sliding buckle was attached to the left bale with 2 hollow rivets.

The bales were attached with rivets between the leather strap and the inside of the helmet shell. The 2nd model chinstrap was replaced by the new 3rd model chinstrap on all m16 helmets in circulation.

Ultimately, several models were produced of the model m16, namely: