The m53 Troops helmet was introduced to the Dutch Armed Forces in 1953 and remained in use until the mid 1990s, until it was replaced by the m95 combat helmet.

The m53 Troops helmet was a 2-piece helmet modeled on the American M1 helmet. 8 different manufacturers supplied the liners to the Dutch Armed Forces and 4r manufacturers the steel shells. Most liners were supplied by Schuberth and most steel shells by Linnemann-Schnetzer.

A liner in a dark green color.

A liner in a light gray colour. These gray liners were used by the Air Force (KLu) and eventually most gray KLu liner were painted green and in some cases white.

A liner in a dark gray colour. These gray liners were used by the Air Force (KLu) and eventually most gray KLu liner were painted green and in some cases white.

An early white liner with blue crowned M of the Royal Marechaussee (KMar). The blue band is painted on the early copies.

A white liner with blue crowned M of the Royal Marechaussee (KMar). The blue band is made from tape on the late liners.

A white liner of the Royal Marechaussee (KMar), painted over in black.
Black inner helmets were worn by the KMar professional staff.

A green liner of the Royal Marechaussee (KMar), painted over in matte black.
Black inner helmets were worn by the KMar professional staff.

A liner revised and painted in UN blue. This liner has been used in Lebanon.

A type II liner, rejected for combat use but could be used by other non-combat military organizations within the Army.
Helmets used by civilian employees within the Army had a white 'B' which stood for 'Burger' (Civilian).

A liner used by the Marine Corps. This helmet has been revised by the Navy workshop. The outside has been painted over in a dark green colour and the interior has been replaced for a Navy model.

1st model interior produced by Verblifa.
The leather band is attached with 6 metal clips.
The chin-strap is made of leather.

2nd model interior.
The leather band has been replaced by one with 6 leather fastening loops instead of metal clips.
In use from the late 1950's / early 1960's.
The chin-strap is made of canvas.

3rd model interior.
The leather band has been replaced by one with 4 leather fastening loops and 2 press studs at the front. In use from 1963.
The chin-strap is made of canvas.

Type II liners got 2 white stamps with 'II' on the inside.

Navy model interior.
After revision of the liner by the Navy workshop, the liner was fitted with this type of interior. Typical is the neckband, which is the American model.
The chin-strap is made of canvas.

A late Schuberth liner from 1958. The one shown here has never been used.

Schuberth liners from 1958 were supplied with the 1st model leather sweatband with 6 metal clips and leather chin-strap.

Schuberth liners from 1958 were supplied with a neckband with 2 press studs on one side.

Schuberth liners delivered from 1963 to 1968 were supplied with the 3rd model sweatband and canvas chin-strap.

Schuberth liner from 1970, the first delivery of plastic liners by Schuberth to the Armed Forces. Schuberth's early plastic inner helmets have a vent at the front.

Schuberth liner from 1981. The late plastic liners from Schuberth have no vent at front.

Schuberth liners from 1958 have a white stamped P (early) or pressed P2 (late) marking in the dome.

SW 72. The letters SW are mirrored.

A liner from Us in the color bronze-green.

A pressed marking H.L. 80 can be seen on the interiour.

A VB steel shell in mat black, used by the Royal Marechaussee.

A VB liner in dark green with applied blue crowned letter M and blue band. These were used by the Royal Marechaussee, between 1951 and 1953.

A LS steel shell in mat white, used on the Infantry Shooting Camp Harskamp in the 1960's and 1970's.

An LS steel shell in black, used by the Royal Marechaussee.

A LS steel shell in UN blue, used in Lebanon during a UNIFIL mission.

A US steel shell in UN blue. Intended for use in Bosnia, early years of the UNPROFOR mission. However, this helmet has never been used.

A VDN steel shell in bronze-green.

A VDN steel shell in UN blue. Used in Bosnia, early years of the UNPROFOR mission. 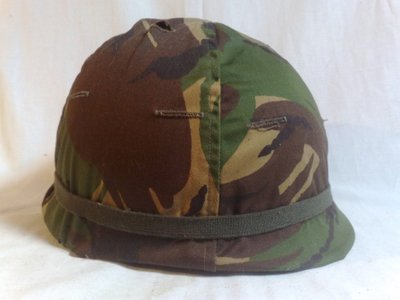 For m53 nets and helmet covers, click on the picture above.

A Verblifa steel shell used by the Belgian Armed Forces.

In October 1968, the Karel Doorman (R81) aircraft carrier was handed over to the ARA (Armada de la Republica Argentina / Argentinian Navy) where she was installed as the ARA 25 de Mayo (V-2).

3 of the 13 m53 steels shells still have the Dutch MvO domestamp.

There is also 1 Argentinian produced M1 (FM: Fabricaciones  Militares) known with a Dutch made m53 chinstrap attached to it. 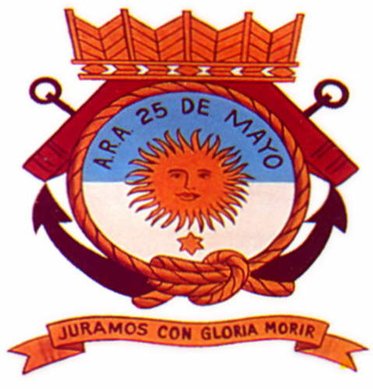 The helmet shown is one of the m53 helmets handed over to the Argentinian Navy with the Karel Doorman.

This helmet was a donation to the Dutchhelmets Collection.

This helmet has been revised several times by the Argentinian Navy and has 3 layers of red paint. This helmet comes from the inventory of the ARA 25 de Mayo and serviced as a helmet of a ‘Damage Control’ unit on board.